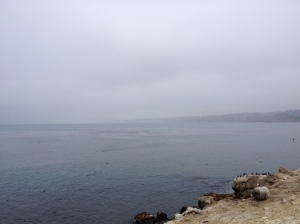 Above tranquil water at the Cove hovered a healthy marine layer. June Gloom they call it. Where did the water, land and sky converge? Unknown, and I wasn’t going to swim far enough to find out. My mission, simple enough, was threefold: 1) Test out my cozy new wetsuit  2) Avoid marine life  3) Cross “tackling fear of open ocean swimming” off the Bucket List. The results: Done, Done and Done.

The swim itself was surreal–and much more enjoyable than anticipated. The water was warmer than expected (and no, I didn’t christen my wetsuit the old fashioned way as I wasn’t sure I’d keep it). The kelp forests were more abundant than envisioned. The sea life was more active than imagined. I noted plenty of fish and even (gasp!) a shark–though not a man-eating one I am certain. I did have a face-to-face encounter with a seal, also enjoying his morning exercise. Equally startled by one another we locked eyes and then amicably parted ways.

In hindsight it all sounds peaceful. But let me assure you that my thoughts prior to and upon entering the water revolved around seal diarrhea and shark attacks. I’ve witnessed the former and heard tales of the latter, and there I was electing to put myself in the middle of both. Images of these eliminated any lollygagging on my part. Get in, swim hard, get out.

Two weeks later I ventured out on a bright, sunny morning a few miles up the coast. Concerns of seal diarrhea were replaced with some anxiety about contending with an actual surf. I have raced in the nastiness that is the Hudson River and many murky, bacteria-laden lakes, but I’ve never had to break through the surf to reach the open water. New is what keeps it exciting (or so I tell myself).

Pummeled only once or twice I came to enjoy the challenge. Going with it rather than fighting against it, I finally relaxed. Eventually I emerged with fingers and toes–and everything in between–attached. I’ll even go back for more, especially now that my wetsuit has been officially christened. 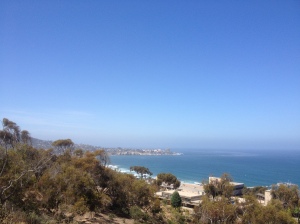