That’s right– it’s the sport of tennis I describe. If you’re looking for schmaltzy romance, you’re on the wrong page. In this game, love means nothing. Literally: Nada. Zilch. Zero. What is to love about that?

Supposedly the scoring system reflects the notion that one plays for the love of it, and nothing else. Not points, not victory. As I chip away at the (many) layers of rust, I might have a tiny understanding of that–finally.

I grew up a tennis player, and put a lot of time, sweat and tears into my game. I loved it as much as I hated it– and after my last high school match the latter feelings forced me to take a 17-year hiatus.

Much has changed since my final days on the court. My knees are creakier, my eyesight is poorer. I have grown into my large feet… and also into my sports bra. I might– just might– have developed some maturity and perspective, too. I’m appreciative for all that my parents gave to me: lessons, encouragement and a lot of court time with my dad. He and I even won a mini-tournament, a highlight (I think) of his parenting years.

In my return from retirement, my stroke actually hasn’t changed much. Timing is another story. What a fine line there is between miss and a winner! If I can keep enjoying the sport, I know that I can only improve.

As my game is coming back to me, my expectations increase. I have to check my irritations at the gate, accepting that less fit women with much less finesse will lob and “push” their way through the points. It gets me every time. I will not bend to that kind of game– never have, never will. I vow to work only on my stragety and also to silence the profanities that are eager to fly from my mouth. Remember– the maturity is still very much in development. I have to actively remind myself that it’s all about the love. 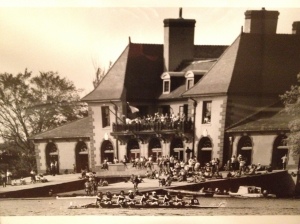 I had a date last night. We met over a steamy hot chocolate. We discussed lofty goals, reminiscing about the past and dreaming of the future. I hope I had a hand in his destiny. I hope he is accepted to Harvard.

For several years now I have been volunteering as a Harvard Alumni interviewer. Upon relocating, I switched from the Princeton chapter to the San Diego committee, and last night I met with my first west coast applicant. He was reserved, initially, and squirmed a bit in his belt-less slacks, non-button-down shirt, clunky black dress shoes– all of which he was clearly not accustomed to wearing. I could tell that this was not his persona. I could tell that he hadn’t been coached for his interview. Not like the kids I had met in the past– those from extreme privilege who know not how fortunate they are to attend respected east-coast prep schools, and have access to personal SAT tutors, essay counselors and interview coaches. Even those from the excellent public schools in the Princeton area felt entitled to the best of higher education, and pursued Harvard sometimes just because they have straight A’s and access to the common application.

This kid, however, made an impression on me. He didn’t claim to have unparalleled intelligence and he didn’t promise to cure the human race of cancer. He did, however, divulge that he worked a landscaping job last summer to fund his own application fees. And when he earned the coveted National Hispanic Scholar recognition for his PSAT scores, he had to call the number on the form to find out what this meant. He didn’t know that this is something a high school college adviser should inform him of, because he didn’t know that they even exist.

Throughout our conversation this kid warmed up and loosened up. I was able to extract meaningful details of his high school education and catch a glimpse into his character. I’m the interviewer who is more focused on the latter, favoring personal stories over grades and scores. The school can see that part on the transcript. Rather, can you look me in the eye and exchange quality conversation? Can you tell me with sincerity why Harvard is the place for you above all other institutions? And can you relay to me, so that I can convey in my words, to the admissions committee why they should select you over thousands? Here’s a tip: don’t say you applied because your mother told you you should.  Yes, I actually did receive that as an answer one time.

I interview these candidates not because I think it will help my own kids’ chances of being accepted. Statistics say they won’t. My small contribution to the process over the years won’t change that, nor would I want it to. I choose to be involved because I’m interested in keeping current with kids in their high school years. Sometimes I’m frightened by what I see; I’m horrified by their lack of diligence; I’m disappointed by the shortage of appreciation. But most of the time I’m impressed, inspired and humbled by the kids’ talents and accomplishments. It reminds me that the only thing remarkable about me at Harvard was that I was/am simply not remarkable. By several accounts I should never have been accepted myself.

I clearly recall my first misstep, and it goes down in family legend. My initial Harvard interview– the one that assessed my preparedness for kindergarten at Trinity having completed my nursery years at Episcopal–was nearly unhinged due to apples. Yes, the simple fruit came close to destroying my whole scholarly future. How many pieces do you get when you cut in apple in half? asked the interviewer.

Four, I answered. Several times I was asked because, I think, she was in utter disbelief. Several times I answered, Four. I wouldn’t budge. After all, every time the teacher cut the apples for snack, there were always– and I mean without fail– always four pieces. It made complete sense to me that apples were meant to be shared in fours. I used logic. My logic based on my experience. Well, at the very least I showed my unwavering commitment to what I believed was right.

Not too much has changed– I see now that an apple cut in half literally means into two pieces. And yes, I have quizzed my kids on that to make sure they don’t commit the same educational crime. No,  I still believe what counts is not how well one can count, and that good character and commitment to what is right propels us forward.

Just before this candidate and I departed, he turned to me and asked with heart-rending vulnerability, Can I ask you something?

If I go on to do more interviews, do you think what I am wearing is OK?

I gave him a reassuring smile. I think you look great; don’t change a thing.