Just as we had hoped, kindergarten has been a year of enormous growth for our son. As evidence his pants are further from the ground each day, his teeth are dropping faster than the temps on the East Coast, and his adorable “Boston” accent is gone thanks to a record-setting articulation intervention for his r’s. (We had a Wodney Wat situation going on, which apparently isn’t so cute to kindergarten teachers who focus on phonetics).

While I celebrate the many achievements and milestones along the way, I have to admit to feeling relieved when I see glimpses of lingering youthful innocence. Simply put, the kid still loves mermaids. Sigh.

Here’s to not growing up too fast.

You didn’t have to grow up in the 80’s with a Jewish mother and you don’t have to love the (hysterical!) TV series The Goldbergs to appreciate the significance of the mother-son dynamic. Or the mother-child relationship in general. Can you fault a mom who is never satiated by enough “snuggies” from her “yummy” kid who “smells like the dryer?”

Here’s to the Beverly Goldbergs of the world.

Back to the mermaid. She sits next to me now as I write. This gorgeous creature was created by a spectacular balloon artist who entertains at the hip eatery Snooze on Sundays. Waiting for our pancakes, we saw that she was making the rounds and flagged her down as she approached our table. At first my son requested a puppy because it was safe. A safe bet for both of them. Somehow–perhaps after seeing the fantastic mermaid he had drawn on his placemat–the balloon artist knew that puppies weren’t really his thing. Gently and subtly she encourage him to challenge her skills.

“Would you like a merman? I did one for the bartender the other day. It came out great!” She assured him.

Bashfully my son shook his head.

“Oh, a mermaid? I think I can do one of those. But you need to tell me what color hair you’d like her to have.”

And with that we were all captivated. Yes, she twisted balloons into a fantastic form with uncommon skill. But, moreover, she read the mind and heart of a child, and celebrated a spirit that is often dismissively squashed. Yes, even Santa has second-guessed my son’s requests, and the cashiers at Target have questioned his choices. But the balloon artist? No, she was inspired by his creation. The result was one incredible mermaid and one ecstatic little boy. 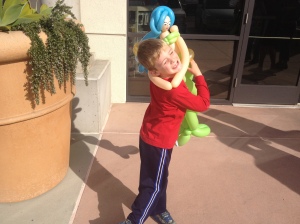